Shifter Tales is a shape-shifter series  with mm twists to your favorite fairytales. Some of the books contain elements of male pregnancy even if they are not tagged so on the various websites.

Phelan is a wolf shifter and a prince of his kin. All of his life, he’s been taught to believe in the superiority of his people. But when the shifters’ dismissive cruelty toward humans draws the eye of a mysterious witch, it is Phelan who becomes the target.

Now cursed, Phelan is forever bound to his animal form, while being the only one of his people to maintain his sense of self. The only way to break the enchantment is to find a human to love him. But who could have that kind of affection for a wretched, broken beast?

It seems like a lost cause, until one terrible winter, he meets beautiful and kind Elian. Elian brings warmth once more in Phelan’s heart. His gentle fingers tend to Phelan’s wounds, and his soft voice soothes Phelan’s soul. Phelan soon realizes Elian is his mate. But can this love surpass all the obstacles in its path, or will it be cursed like the rest of Phelan’s kin?

Shay has an uneventful existence. He delivers his mother’s baked goods to shifter families and tells stories to his brother in his free time. Everything changes one day when, taken by surprise by a mysterious storm, Shay finds refuge in the home of a peculiar shifter lord. He does not expect for the shifter in question—Conor—to make unprecedented emotions swell inside him.

Spurned by his own family, Conor knows he should keep his distance from his beautiful, red-hooded guest. But from the moment Shay steps onto the grounds of his mansion, Conor is drawn to him like a moth to the flame. He tells himself it is all only temporary and tries to stay away, even if Shay’s smile and his trust make him feel for the first time more than the beast he knows himself to be.

What happens when the two men are unexpectedly trapped together? Will the help of an unlikely ally be enough to give this particular tale a happily ever after?

A few hundred years ago, Nexus, the last free kingdom of humans, fell under a terrible curse. Its prince, Lotus, still slumbers, trapped in an icy prison of his own creation, in a cold and lonely realm.

In an unlikely twist of fate, lion-shifter Kasar stumbles onto the secret of Lotus’s existence and is immediately drawn to him. He embarks on a journey to find and free Lotus. But Lotus is still burdened by guilt, fears the curse’s effect on Kasar and thus denies him.

Will one lion’s determination be enough to shatter the enchantment or will Lotus wither away and die, along with his entire, lost land?

Royce always believed he was human. He’s not.

Royce loves his family deeply, whether they are shifter or human. But everything he thought he knew is shaken when he finds out some of the things he has taken for granted are lies. Adrift after this life-altering revelation, Royce flees, only to literally fall down a proverbial rabbit hole. To make things even weirder, he finds an odd-looking lamp, one that doesn’t contain oil, but rather… a man. The most beautiful man Royce has ever seen, and one who offers to fulfill his every wish.

Keyan is a genie and a rabbit-shifter. He has been trapped in the lamp for centuries and now, he needs to be reunited with his family. He is also incredibly drawn to his shifter rescuer, Royce. At the crossroads between past and future, will one lone genie finally have his own wish fulfilled, or will the secrets still to be revealed prove to be too much for the unlikely couple? 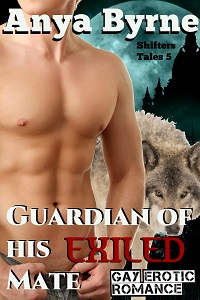 Prince Blaise is raised in the loving arms of his parents, wanting nothing more than to make them proud and be the heir his father needs. But when disaster strikes, Blaise’s hopes and dreams come crumbling down. He is a failure and an anomaly, and his home is lost to him.

To keep him safe, his parents, Prince Phelan and his consort Elian, are forced to secret him away in a distant tower, there to wait for the right time to be rescued, for the right man to find him.

When traveling blacksmith Aran comes across a mysterious map in a mere game of chance, he knows he should not pursue it. He has no desire for treasure or adventure, and he is no hero. He is anything but.

He sets out on a journey regardless—and what he finds at his destination is beyond anything he could have ever expected. He finds Blaise, his mate, the man he is meant to help and protect.

But will Aran’s determination be enough? Between the dark shadows of Aran’s past and the encroaching threat of war coming from the Great Wolven Kingdom, can the bond between Blaise and Aran even survive?