The Ripples are not meant to be read in a particular order (at least, at this time), but for organizational purposes, I’ll list numbers here.

The courage of the Lone Wolf Pack changed more lives and affected more destinies than they’d ever thought. The ripples echoing through their entire world brought together countless lovers.

Landon Boone is angry. His pack insists on him taking an official female mate, but all he wants is to wait for his other half. An outburst of temper—in a human bar, no less—forces him into anger management classes. It is yet another irritant for a werewolf Alpha with too many problems to count.

He does not expect his mate to walk through the same door Landon dragged himself through.

Angel is everything Landon had wanted, and more—so beautiful he truly deserves his name. Against all odds, anger management classes—the werewolf Alpha edition—actually have a result.

But Angel also carries the burden of a painful past, and it is up to Landon to help his mate start over. Yet if there is one thing the Lone Wolf Pack taught Landon, it is that mate bonds are stronger than anything. He has every intention of proving that to Angel, and to himself.

A dancer at an exclusive club for gay men, Owen Ellis has long ago learned to separate his real life from his alternate identity—the masked Incubus who comes to life on stage. But then a mysterious man comes to his every show, watching him with eyes that speak to Owen in a way he can’t hope to understand.

When love letters and beautiful roses start popping up in his dressing room, he tries to tell himself romance can never happen in such a situation. But the man’s gaze follows him in his dreams, as does the want he can barely contain.

Unbeknownst to him, his secret admirer is none other than Luther Valentino, an Alpha werewolf with a painful past. Despite the love he already feels for Owen, Luther can’t help but fear what his nature might mean for his human mate. Can the stories of the Lone Wolf Pack’s courage bridge the gap between this unlikely couple? 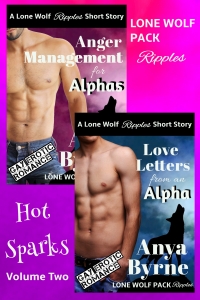 Perry is on the run. Hunted by humans who want him for his half-breed legacy, he has nowhere to hide and nowhere to escape. He is on the verge of losing all hope—when an unexpected rescue changes his life forever.

For years, Clay has been living as a lone wolf, his emotions anchored only by the magic of his friend and employer. The moment Clay meets Perry, his heart is finally warm again. Simply looking into Perry’s innocent brown eyes makes it clear that he would do anything for the beautiful half-breed, for his mate. Unfortunately, for that exact reason, for Perry’s safety and his future, Clay has to let him go.

Can the couple find a way to be together—or will the fire between them burn out and leave Clay once more with a lonely heart?